Our datacenters have all the needed services such as firedetection, security system, emergency power, AC units and a meeting room... What about the coffee? Thats free of charge!

InterDC datacenters are environment friendly datacenters. Meaning that we use renewable energie and we use the temperature of the outside air to cool our datacenters.

Our Hengelo datacenter is a ISO27001 and NEN7510 certified datacenter designed according to the Tier 3 specifications. The Tier 3 specification describes how the minimal expected availability of 99.982% can be guaranteed by use of redundant components througout the datacenter (Power, Cooling and Internet).
InterDC can accomodate a total of 70 racks and thus can house over 2000 servers.

A schematic view of the Hengelo datacenter: 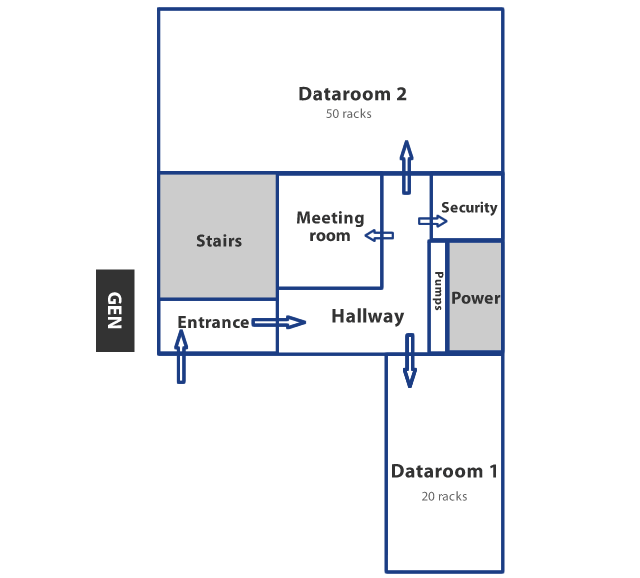 The Hengelo datacenter consists of approximately 1,377 square foot for a total of 70 racks and uses a raised floor system for optimal cooling and cable management. With a raised floor cold air is provided through the ventilations panels placed on the datafloor surface. The server racks are placed in a hot and cold corridor for the most optimal cooling performance.

The racks on the raised floor

The Hengelo datacenter is secured by multiple HD cameras and motion sensors which allows us to detect possible intrusions in a darkend environment. Physical access to the datafloor is regulated via access cards and unique pin numbers. In the event that someone loses his / her access cards, no access can be gained without the unique pin number.
Every camera, motion detector, light and doors are managed via our BMS (Building Management Software). In addition to security our systems monitors data from temperature, power usage and fire detection sensors.

The electrical system is equipped with a redundant UPS system from Eaton in combination with a Lovol Marelli back-up generator. Thereby every rack is provided with two redundant 16 Amp power feeds (No-break).

The datafloor is protected via the VESDA (Very Early Smoke Detection Apparatus) laser detectors. VESDA is capable to detect a fire in the very early stages. The moment the VESDA system detects a possible fire it will send out an alarm via our BMS (Building management system). Thereby hanging in the hallway leading to the datafloor are multiple CO2 fire extinguishers.

The Hengelo datacenter uses free air cooling for most of the year, which means that outside air is being used to cool the servers. This method of cooling is possible because the temperature, in the Netherlands, is below 20 degrees celsius for about 80% of the year. The remaining 20% of the year uses the traditional systems from York.

The average maintained temperature in the datacenter is ± 24 degrees Celsius.

Chillers on the roof

InterDC Hengelo also provides a meeting room and a canteen for lunch breaks.